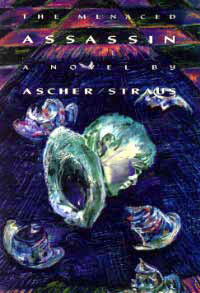 "THE YELLOW SERIES 40
Muffled blows of wind that, if only there were someone to hear them, could be heard striking the building's outer walls and those unlucky enough to find themselves outside the quiet and sunny shaft of the courtyard. Out there, things are already in progress: the everyday narrative of events, objects, air currents, suicides, telephone poles, secret documents, is busy inventing more-or-less the same city it invented yesterday. While those inside, gossiping in the warm and quiet courtyard or smoking small but powerful cigarettes in deep green chairs in fairly large yellow rooms, are filled with the usual sentimental and ruthless longings.

"THE YELLOW SERIES 140
The first word becomes other words, everything that crosses its path, like an airplane engine condemned to suck up everything from one end of the sky to the other and drone the same sub-musical chords through 2000 miles of space.

"The sun, escaping the notice of someone on the fourth of six stone steps, between double rows of orange trash barrels, reading The Canary Murder Case or Journey to the Center of the Earth, strikes like a bullet fired from over the dark, shaved rooftops, off the edge of the wooden frame of a green chairback in a yellow room that exists, just like everything else. One can imagine a real world beyond the smoked glass window if one likes, or one can suppose, with more logic, that its brightness is a property of the glass."

"The Dane, naturally, also had his tales to tell. The radio too. Not to mention the 40-track tape deck. Celeste wasn't at all certain whether or not these transmissions could be considered part of the mobile auto's thumbnail library.

"For example: A pane of glass had broken in his bathroom. At least 8 weeks had passed since the landlord had promised to do something about it. And just today he'd found out the reason for the delay. It seemed the glazier--or the glazier's brother, so that the glazier was in mourning--had been murdered in the back of his shop. Cut to pieces with some tool of the trade. Yet they hadn't stolen a dime.

"Celeste couldn't help feeling that there was some hole in this tale that left it a perfect blank. The unsuccessful robbery of some pauper who lived at the back of the usual shabby storefront? Or the successful search for a secret that required the meticulous autopsy of a living body."

"THE YELLOW SERIES 140,000
A thick yellow bath towel is folded 10 times over the back of the deep green chair with the wooden frame. You don't recognize it. In fact, someone's folded it so neatly that you're sure you've awakened in a hotel room from which the previous occupant just skipped without paying his bill, taking with him a worn-out face towel, a flamingo-colored ashtray stolen 20 years earlier from a nightclub in Havana and a copy of The FBI Nobody Knows or The Lost Continent left behind by the previous occupant who'd skipped without paying her bill, taking with her a set of colored plastic swizzle sticks with the names of every Victor Mature movie ever made and a newspaper with the headline HEAD FOUND BREATHING IN VACANT LOT."

"Now the guy in the perfectly dry English riding clothes and the drunk in the damp midnight blue raincoat were getting along fantastically well, almost as well as Herbert Marshall and Melvyn Douglas in Angel.

" ‘Well, Poochy, I can't tell you what else you ought to be doing. But I can tell you that the notion of abstract responsibility is ridiculous.’

" ‘Don't I know it! A life of a zillion boring milliseconds!’

" ‘All the while dreaming of an impossible salvation through work, etc.’

" ‘Exactly! What do I care what happened or not?’

" ‘Still, you'd like to know what happens to her, whether she's happy, and all the rest, I suppose.’

" ‘I'd like someone to tell her: he didn't exist until he met you. Your father is his father. He bequeaths you his car, no matter what make, model and optional equipment it has when you find it--and, of course, all its contents.’ "