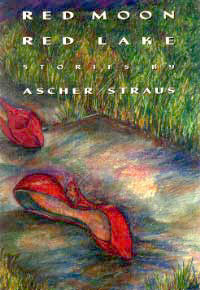 “Donald Green is sitting on the grey porch steps in red corduroy slacks, black polo and red aviator sunglasses, chugging down a bottle of Moosehead. From neighboring houses the sound of human murmuring resolves into an even, horizontal exchange of tones and frequencies, the voice of daytime television with or without someone watching.

“Marian, the middle-aged blonde who lives alone in the big ground floor apartment, and who has a face like something pressed against a plate glass window, arrives home pickled. She’s wearing a black velvet blazer, grey wool slacks, gold hoop earrings, and she’s juggling a black portfolio and a brown supermarket bag.

“Donald says he doesn’t care for round steak. He likes chuck steak. His father used to have four deep freezes in the garage, all filled up with meat. Fifty turkeys. Big goddamn dinners all the time. Two pounds of steak for each child: two brothers, one sister, four in all. His father had this thing with food — he was just a little nuts when it came to food. A zillion goddamn barbecues: a giant Charmglow gas grill, Maverick electric grill, a Weber dome-lidded kettle grill and smoker and an ordinary circular grill. Plus an indoor/outdoor electric and a few portables. Couldn’t have too many barbecue grills. One time he was having a barbecue over at his place and he couldn’t get his father to part with one of his old 2’ by 2’ hibachis. Over at Rudi, Pam and Polly’s it was another story. They had just about anything they wanted. Candy and cake and soda all over the damn place. You never saw three fatter, more spoiled kids.

“Marian says the subway died in a tunnel. Took her 2 1/2 hours to get home. Just about ready to die of hunger.

“He laughs, but Marian doesn’t seem to get the joke.

“He’s still starving! Half a roast beef sandwich is nothing for a growing boy like him. He could eat a fistful of tacos. Maybe some burritos and some flautas too. He wouldn’t mind treating himself to something special. Did Marian ever get into a frame of mind where there’s nothing in your life worth celebrating, not likely to have anything worth celebrating for the next hundred and fifty years or so, but even so you feel like celebrating? What’s the proper way to handle a mood like that? The thing to do might be to go out and celebrate with something crummy. Maybe go out and get some Colonel Sanders, stroll over to the beach with your drumsticks and mashed potatoes and have a picnic down there. By the time he gets back Pam’ll be home and he can get her to feed him just a teentsie bit of the beef and noodle casserole she has waiting to be re-heated for Ted. Unless Marian has it in her mind to invite him in for a little salad and round steak and maybe a decent drink or two. The scotch Pam and Ted have tastes just a tiny bit like Robitussin.

“He notices with disgust that Marian isn’t listening. No more than she’s listening to the brief notes and lengthy intervals of a bird hidden in a row of unnaturally dark hedges. She’s trying to make her way up the stairs and having trouble. Each step seems to be more of a 1/4” round rod than a flat board.

“It crosses Donald’s mind that he really ought to help her up with a hand on the elbow or an arm around the waist. But he reckons very quickly that whether he helps her or not he isn’t going to get any round steak. He stays where he is, drinking his Moosehead and gazes out into the street where two adolescent girls, one honey blonde and one wavy brunette, both in blue polos and jeans, are practicing riding bicycles with no hands. They look one-dimensional to him, cut-out and sharp-edged, as ignorant of the world they’re sailing through, bright shadows over darker shadows, as the moving targets on a rifle range.” (from “The Accomplice”, story #3 in Red Moon/Red Lake)

"A skinny housewife washing her venetians on a red stone porch with a stiff brush and a yellow pail of water.

"Cicadas building up audible pyramids of tremendous intensity at a hundred points within earshot.

"Distant trees in a yellow powder.

"So that it was possible or inevitable to feel like one blazing thing among many: drawn up to the sun--burned away--and returned to Earth--in one swift gesture repeated how many times without replacing you entirely." (from “Second Life”, story #2 in Red Moon/Red Lake)

"Ted props himself up in bed. He smells coffee perking, the complex aromas of singed toast and browned butter. Rudi is snoring behind the wall, asleep and dreaming in the blue nursery, sending off the usual thermal, bio-electric and chemical outlines, like a wide-screen color television someone’s forgotten to turn off.

"He hears sobbing in the livingroom or kitchen, stumbles to the door in his dark bathrobe. Pam is sitting in a chair by the dinette table whose roundness forces a round sense of space on the zone by the kitchen, her head so far down it looks like she’s throwing up. The radio is on, tuned to a twenty-four-hour station.

"Pam says that a report just came over the radio that the body of Marian Lamb, the downstairs tenant, was washed up last night off the Point, her neck broken, her ear lobes and several fingers and toes missing, just like that other poor man they’d found near here a few weeks ago.

"She looks up and meets Ted’s glance.

" ‘But I’m not saying anything, honey,’ he murmurs." (from the title story, Red Moon/Red Lake)

"Across the way a white lace curtain behind a closed window is twitching as if the window were open. Someone, agitated, isn’t certain if she’s seen something odd. Where can the man have disappeared to? She knows for sure that he doesn’t live anywhere in that row of two-family, treeless houses, neither modern nor anything else, an absolute architectural dead point whose inhabitants every morning shake off a weirdly pleasing neutrality in order to accomplish the tasks of the day. He always follows a path, as if avoiding invisible obstacles, toward the old-rice-colored apartment building on the boulevard. The impression that he’d been jerked obliquely, slightly upward, like someone launching into a difficult backward dive, is already beginning to break down into more conventional possibilities. She notices that a few tiny, beet-colored leaves and blue flowers have popped up overnight on her lawn. The blue of the tiny flowers absorbs all her attention, the blue of a distant land mass, perhaps the coast of New Jersey, visible across how many surface miles of ocean, with all its deep shadows and superficial whirlpools." (from the title story, Red Moon/Red Lake)

"Second Life" originally appeared in Epoch, "How the Day Passes" in Chicago Review, "The Brother" (as "The Scar") in Chouteau Review and "Red Moon/Red Lake" as a Top Stories chapbook and in the Top Top Stories anthology published by City Lights.