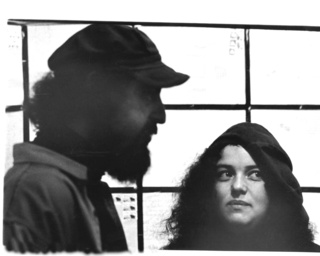 The 30th ANNIVERSARY EDITION of THE OTHER PLANET was published in softcover by McPherson on September 3.  It has a foreword by Stephen Beachy that's an intelligent introduction to the book and a thoughtful overview of our work from early "Space Novels" to current novel-in-last-stage-of-polishing, Headless World (four excerpts in print (two in Your Impossible Voice, two in Exile (Toronto)).

Readers who've read the original  hard cover edition of The Other Planet or who read the new edition can leave comments on Amazon using the link https://www.amazon.com/Other-Planet-Ascher-Straus/dp/1620540339/.

Several sections of Ascher/Straus' new novel, Headless World, to be published by McPherson, have appeared in the journals Your Impossible Voice and Exile (Toronto). An excerpt is in the current issue of Exile (Vol. 43 No. 4) along with a dual literary/autobiographical essay by Sheila and Dennis.  Please read at https://www.exilequarterly.com/product/volume-43-4/

ASCHER/STRAUS=Sheila Ascher & Dennis Straus. We don’t write together in the literal sense, but do in every other sense. We edit each other’s writing (allow no other editing) and we publish jointly without saying who initiated what. To distinguish "who wrote what" is to bow to someone else’s idea of authorship, no more acceptable than bowing to a narrow idea of what fiction can be.

We’ve pursued an unusual degree of personal invisibility and there would be no web site if we thought that would end here (we hope to hide here in plain sight). One way or another what matters in our biographies is in our work: by chronicling what’s not in the mirror but is the life we live or by finding narrative codes for the self.

A long, invisible history of creating narrative outside traditional boundaries (of form, of publication, even of binding) is present in the four novels (Hank Forest's Party, ABC Street, The Menaced Assassin, The Other Planet) and the volume of related stories (Red Moon/Red Lake) that are traditionally published. (There is an entire history of publication, documented event/performance and so on attached to our earlier work).

In the late 70’s/early 80’s, largely in an art context, we created a series of novels we called SPACE NOVELS that used a variety of public spaces (from galleries to air fields) as bindings or structuring principles. (Funding came from Poets & Writers, the National Parks Service, the American Crafts Council and so on.) Our idea was to create a new kind of un-bound novel, transparent and porous between writer and reader.

Our early thinking about fiction, and art in general, particularly about its position between writer and reader and the ways in which the life of writer and reader (down to the ambient, intrusive event while reading or writing) can or cannot be included or suggested, has mutated over the years but never left us entirely. (ABC Street and Hank Forest's Party are its direct descendants.) That thinking and our love of the kind of philosophical narrative not thought to be "American" has probably driven us out of the mainstream. (We have a talent for making decisions that place us on the outside of any given inside, even ones that would seem to be in tune with us.)

For a review of Hank Forest’s Party that also gives an intelligent overview of its place in our writing history see Mary Burger's review in Your Impossible Voice, April 25, 2014.

For an alternative overview of our writing history read Stephen Beachy’s article ”ESCAPE FROM THE PRESENT” in the March '05 San Francisco Bay Guardian Literary Supplement, “WHERE DOES FICTION COME FROM” (Feb. 23 — March 1, 2005. Volume 39, No. 21).

To read Douglas Messerli’s essay, “On the Other Side of the Page (on Ascher/Straus’s ABC Street)”, see his blog for December 10, 2008 (http://greeninteger.blogspot.com).

Because MONICA’S CHRONICLE is now being published on the website we’ve scanned an earlier view of that project, “WRITING WITH SHEILA ASCHER”, which was published in Zone #7 Spring/Summer ’81 as an introduction to the section of "SHEILA ASCHER’S CHRONICLE/SEPTEMBER 1976" that served as the text for the Space Novel “12 SIMULTANEOUS SUNDAYS”.